Karen Laine is the host of the hit HGTV show entitled Good Bones. She hosts the show together with her real-life daughter Mina Starsiak. The show was first launched in 2016 and is now on its 5th season as of 2021. Fans of the show have noticed that the TV star has lost some weight through the show’s last few seasons. It is pretty apparent how Karen Laine is a lot slimmer than when she first appeared on Good Bones in 2016.

Fans who have followed Karen Laine’s television series since season one has noticed that Good Bones’ star has shed some pounds through the years. The home improvement show is not on its fifth season, and Karen obviously looks a lot slimmer.

Although many of her fans have been wondering about her apparent weight loss, Karen has never publicly addressed the issue. She prefers to remain silent about how and why she lost weight.

With the amount of weight that she has gradually lost through the years, it is evident that the TV star has made some changes to her diet. She avoids unhealthy food and sticks to a low-carb diet.

Karen Laine has also shifted to a more active lifestyle. Exercise has now become a regular part of her daily routine.

Karen Laine is already 59 years old, so it is expected that there will be some sagging skin here and there. The TV star has decided to eliminate that saggy skin and achieve her summer body even if she is already nearing her 60s.

Karen achieved her body goals with the help of her son William Starsiak who is an Osteopathic Physician. William is the founder of Starsiak Aesthetics, based in Indianapolis.

Karen’s son performed a non-invasive procedure called CoolSculpting to sculpt the body of Karen. The procedure entailed the removal of excess body fats in a non-invasive way. As a result, a sculpted figure is achieved.

Karen was very happy with the entire process, which took only 30-minute sessions for a span of three months. The procedure uses a device that emits HIFEM+ energy and radiofrequency to strengthen the core muscles and eliminate fat. What is great about this procedure is the absolute lack of any downtime.

Karen Laine may look prim and proper on television, but she has a wild side hidden. The former lawyer appears very business-like and formal at times, but she also has a fun side.

The beautiful koi tattoo extends from the nape of her neck down to her entire back and reaches down to the back of her thighs. That is undoubtedly one massive tattoo that is totally unexpected of her. 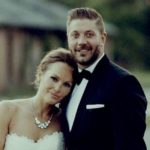 Steve Hawk Occupation, Wiki: What Does Mina Starsiak’s Husband Do?