Mina Starsiak is a famous TV personality and the founder of ‘Two chicks and a hammer.’ She is an American realtor and real estate broker who earned much of her fame working with her mother. As her mother stepped off the show, everyone is interested in how Mina Starsiak will carry on her mom’s legacy.

Do you want to know everything about Mina Starsiak? In this article, we present Mina Starsiak’s wiki, Net worth, family and children details, and much more.

Mina Starsiak grew up in Indianapolis, Indiana, United States. She was born on November 26, 1987. Her parent’s marriage wasn’t stable, which got them into other relations. They got more children, and Mina had a total of seven siblings. She certainly had a lively childhood.

After finishing high school, she went to the University of Indiana to pursue a graduate degree. There, she studied business and sociology. Although she got her university degree, she was always attracted to renovation and construction work.

Later, in 2007, she got her first project. This offer was to renovate an old house, which aligned perfectly with her interest in home renovation. Mina, with her mother Karen Laine, completed the home renovation project in no time.

The TV personality and her mother, started their firm Two Chicks and a Hammer. Their business was booming, which in turn increased Mina’s popularity. After Mina had already completed 20+ house renovations, she started her TV career. She started a TV show on HGTV called Good Bones.

It started when she got an offer to start her show from the casting director of HGTV. It was a huge opportunity, and Mina knew she had to take it.

After accepting this offer in 2015, Good Bones started airing in March 2016. The show becomes a huge success, with six seasons. It was formerly a joint effort of Mina and her mom. But as her mom, Karen, stepped down, Mina started to host it on her own.

The renovation expert has accumulated $2 million so far. She has multiple sources of income contributing to her wealth.

Her biggest earning source is her family business- Two Chicks and a Hammer. She also is a TV star with her show- Good Bones. She receives a handsome salary in the show.

How old is Mina Starsiak?

The co-host of Good Bones also has a real estate license. She gets her kicks from renovating old buildings, bringing life to the ruins of homes, and helping her neighborhood in general.

Occupation-wise, she is a TV star and a realtor. Essentially, she buys old houses, renovates them, and sometimes even overhauls the entire thing if needed. Later she sells the houses to prospective buyers to turn them into homes.

In general understanding, it may sound like house flippers, but the owners of Two Chicks and a Hammer- Mina and Karen, explain that it’s not.

They claim that it is not for business purposes but to make the neighborhood better. They like to rephrase it as Neighborhood Rehabilitators which indeed sounds nicer.

Mina Starsiak is currently married to Steve Hawk. Surprisingly, the couple first met on Facebook and went on a date. The first date didn’t go as planned. Steve’s friend was hitting on Mina the entire night. However, she gave Steve a second chance, and their relations turned out great.

Mina and Steve started their married life from June 2016 onwards. They share two kids- one son and a daughter. In August 2018, their first child was born.

The couple was happy with their first son, Jack. Two years later, the couple invited their first daughter into their home. Charlotte Hawk, nicknamed Charlie, was born in September of 2020.

It was a miraculous birth. Mina had severe issues relating to infertility after her first son was born. Once, during her examination, a doctor told Mina that there was less than one percent chance of her getting conceived.

But against all odds, Mina got her second child. Both of her kids are very young, and she is taking good care of them. We certainly won’t hear about her getting more kids, as she doesn’t want any more children. In fact, her husband is getting a vasectomy which makes it impossible to have more kids.

Mina Starsiak has three siblings- two brothers and a half-sister. Her mother- Karen, got married multiple times. When she was married to Casey Starsiak, the couple got two sons and a daughter. One is Mina, and the other two are William and CR.

After divorcing Karen, Mina’s father- Casey, married Cheryl. They have two children. Their son is Tad and Jessica is the daughter, who is often referred to as Jess. Meanwhile, Karen got married to Randy and birthed Kesley.

Their family dynamic is quite unique. And thus, Mina has three brothers- William, CR, and Tad. She has also got two sisters- Jessica and Kesley. After adjusting to her large family size, Mina Starsiak has five siblings.

Mina is the daughter of Karen Laine and Casey Starsiak. Her mother is a former lawyer, and her father, Casey, is an orthopedic surgeon. He is an American-board certified surgeon with a high reputation.

He completed his medical studies at the Chicago College of Osteopathic Medicine. He specializes in fractures treatment and also looks after sports injuries.

We know Karen from the HGTV show Good Bones. Mina and Karen were the perfect daughter-mom duo who hosted the tv series quite well. However, Karen has stepped back, and Mina currently manages Good Bones on her own.

If the family tree wasn’t already complicated, here’s another fact to consider. Lenny is a contractor from Two Chicks and a Hammer. Lenny was Cheryl’s ex-husband. After divorcing Karen, Mina’s father married Cheryl. After having two children, they separated. This time, Cheryl re-married Lenny makes him Tad’s stepfather. What a warm family.

The HGTV star, Mina Starsiak, underwent plastic surgery recently. Let’s explore the reasons as well as the aftermath of the surgery.

During Mina’s pregnancy, she encountered diastasis recti. This medical condition created four and a half-inch separation right at her abs. As she got worried about her looks, she decided that plastic surgery was the way to go. After counseling, she underwent a tummy tuck, liposuction, and breast implants last December.

It made an enormous impact on her daily life. She looks a lot younger and has lost some weight as well. Before the surgery, she was 160lbs. After the surgery, she is just 148. She advises everyone to focus on their looks. Whether it’s a simple garment change or major surgeries, she thinks the lifestyle enhancement is worth it. 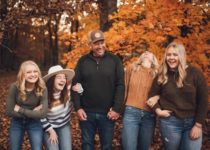 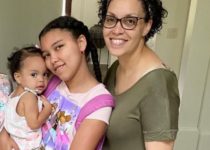